Home »Event »Christmas with Rockapella at the Seminole Theatre

It’s now a Christmas tradition at the Seminole Theatre as Rockapella returns with all your holiday favorites, complete with smooth moves, funny interludes, and of course their tight a capella harmonies, on Saturday evening, December 23rd at 8pm.

They’ve become one of the world’s most sophisticated, lasting, and imitated vocal groups around today. You’d be hard-pressed to find a more influential group out there in this new era of network television a cappella shows like NBC’s The Sing-Off, movies like Pitch Perfect, and innumerable college vocal groups that own the corner of cool on campuses everywhere. 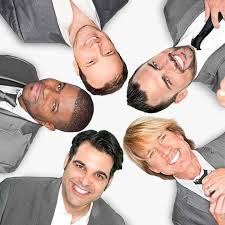 Since the early ’90s when they first achieved national television fame on PBS’s Where In The World Is Carmen Sandiego?, they’ve toured the globe and provided a funky powerful soundtrack to several generations of vocal music fans, while keeping it all fresh along the way. With buckets of catchy original pop songs, and complete contemporary revisions of sparkling Motown, pop, and soul classics, this group has always been the one to watch.

The historic Seminole Theatre is one of South Dade’s premier cultural venues, located at 18 North Krome Ave in Homestead’s Main Street pedestrian section. For schedules and ticket information, call 786-650-2073 from noon to 6pm Tuesday through Saturday, or visit the web site anytime. http://www.seminoletheatre.org/