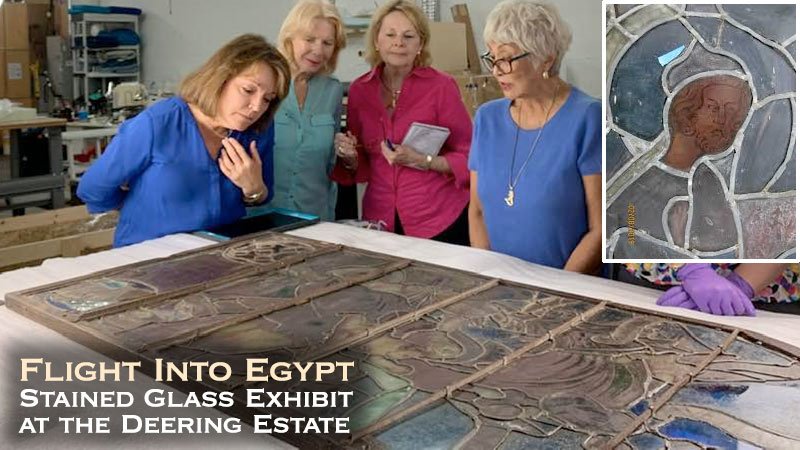 The 100 Ladies of Deering, together with The Deering Estate Foundation, are proud to present two rare, centuries-old stained-glass panels known as the Flight into Egypt, allowing the public to view these beautifully preserved pieces.

This exhibit features part of Charles Deering’s collection recorded in the 1924 inventory of gifts to his daughters. Two pre-17th century works of art originally displayed in the entrance hall in the Stone House depict variations of traditional flight into Egypt motif, the holy family’s journey to escape the violence in their homeland from King Herod. During the Reformation period (1517-1648), some stained-glass pieces were intentionally destroyed. Other losses were sustained during WWI. Important antique glass panels like these are now generally found only in private collections and major museums.

After years of planning, restoration recently began thanks to the 100 Ladies of Deering, a philanthropic circle of The Deering Estate Foundation, who led the restoration efforts. The efforts began with lead gifts from two private donors, along with a matching gift provided by The Charles Deering McCormick Fund. By restoring these treasures and presenting them for public display, the public will have rare access to art of this time period, exhibited fully restored, in the same building they originally hung almost 100 years ago.