John Popper, the iconic, charismatic lead singer of Blues Traveler, the popular rock and jam band from the 1990’s celebrating their 30th anniversary this fall, brings his harmonica and bandmate Ben Wilson, on piano, to share an evening with fans at the Seminole Theatre on October 8th at 7pm. 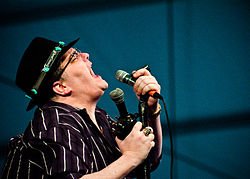 A prolific songwriter, he has composed the majority of the lyrics and music of Blues Traveler’s songs.

Tickets and information are available at the Seminole Theatre box office, 786-650-2073 or at 18 N Krome Ave, Homestead, FL. The box office is open Tuesday through Saturday from noon to 6pm. http://seminoletheatre.org/an-evening-with-blues-travelers-john-popper

Using his harmonica designed uniquely by Fender and his legendary voice, Popper entertains with an evening of classic Blues Traveler’s tunes, “Run Around,” “Hook,” and “But Anyway,” breaking down the hits and sharing the stories from his long and successful colorful career, from the formation of Blues Traveler, his relationship with H.O.R.D.E Festival, all the way to his involvement with the Grateful Dead.

Popper is widely considered a virtuoso, thought to be the greatest harmonica player in rock music. Formed in 1987, Blues Traveler has platinum and gold albums to their credit. Over their 30 year illustrious career, Popper has been the voice on more than 10 million albums and 2000 live shows in front of 30 million people. “Run-Around” is the longest-charting radio single in Billboard history and earned them a Grammy.

A television favorite, they have been featured on Saturday Night Live, Austin City Limits and VH1’s Behind the Music, and they hold the record for most appearances of any artist on The Late Show with David Letterman.