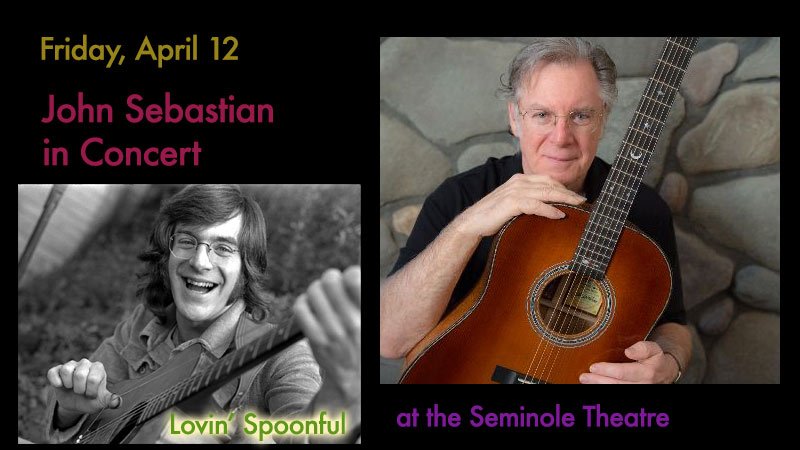 John Sebastian comes to the Seminole Theatre for a single performance on Friday, April 12 from 8 to 10pm. Best known as a founder of The Lovin’ Spoonful, a band inducted into the Rock and Roll Hall of Fame in 2000, Grammy Winner John Sebastian has been thrilling audiences and remains in-demand as a solo artist, studio musician, TV/film scorer and songwriter.

With many top 10 hits, plus more than two dozen albums and countless live performances around the world, Sebastian has become a permanent part of our American musical fabric. His hits include Darlin Be Home Soon, Do You Believe In Magic, Summer In the City, Did You Ever Have to Make Up Your Mind, Daydream, Nashville Cats and Welcome Back Kotter.

Sebastian became part of the folk and blues scene that was developing in the early 60s in Greenwich Village and later gave rise to folk rock. In addition to harmonica, Sebastian played guitar and occasionally autoharp.

Sebastian was joined by Zal Yanovsky, Steve Boone, and Joe Butler in the Spoonful, which was named after “The Coffee Blues,” a Mississippi John Hurt song. The Lovin’ Spoonful, which blended folk-rock and pop with elements of blues, country, and jug band music, became part of the American response to the British Invasion, garnering lots of radio play and albums sales.

In August 1969, Sebastian made an unscheduled appearance at Woodstock. He traveled to the festival as a spectator, but was asked to appear when the organizers suddenly needed an acoustic performer after a rain break because they couldn’t set up amps on stage for Santana until the water was swept off.

Tickets and information are available at the Seminole Theatre box office at 18 North Krome Ave Tuesday through Saturday from noon to 6pm.