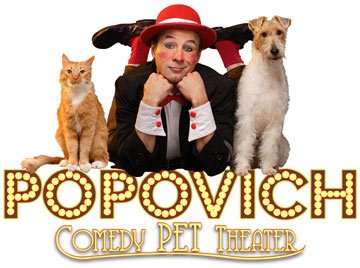 Popovich Comedy Pet Theatre is the most beloved family show in the world, featuring European-style circus extravaganza including physical comedy, juggling, acrobats from the Moscow Circus, highly intelligent dogs and even house cats.

All pets are trained using positive reinforcement techniques and enhancing their natural abilities.

Popovich, a fifth-generation circus performer who learned early on how to develop strong bonds with animals, has rescued a majority of his performers from shelters all over the country and has transformed them into Las Vegas stars.

He is a gold medal winner in Paris, France and a special award winner in Monte Carlo. Gregory and his pets were finalists on “America’s Got Talent”, were guests on TV shows with Jay Leno, David Letterman, Craig Ferguson, was a feature on Animal Planet and many many more.

Do not miss this opportunity to see this unique family-friendly show featuring this legendary circus entertainer and his furry friends.