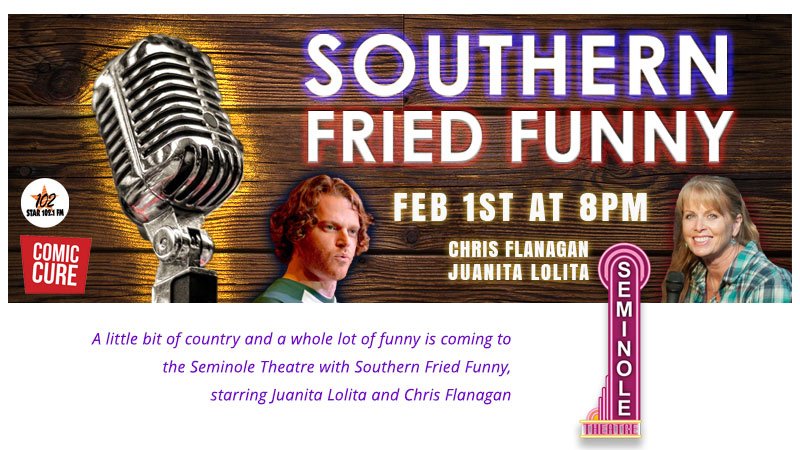 A little bit of country and a whole lot of funny is coming to the Seminole Theatre with Southern Fried Funny, starring Juanita Lolita and Chris Flanagan.

Juanita Lolita’s comedy career began when a coworker signed her up for an open mic night. Within one year she was performing for over 7,000 women at a church conference in Atlanta and since then has performed throughout the Southeast. Recently she was voted Tampa’s funniest female and has been featured on CTN, ABC and several radio shows.

Chris Flanagan has been entertaining folks around the South and beyond with his high-energy comedy for years. His stories of being raised by a teacher and growing up poor in Mobile, Alabama will leave you in stitches. Chris won the Comedy Central South Beach Comedy Festival. He made the Top six of the World Series of Comedy(SE Regional, 2019) and the Top 101 W.S.C Comics in the country (Las Vegas). In addition, he made the Finals of Florida’s Funniest Comedian (Top six in state), which has deemed him one of “Florida’s Funniest Next Rising Stars.” He was also the “Official Comedian of the Miami Dolphins (NFL).”